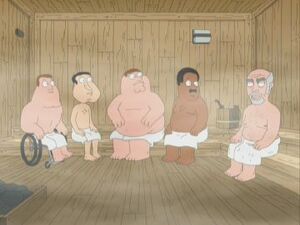 He is best known for portraying the character James Bond in film, starring in seven Bond films between 1962 and 1983. In 1988, Connery won the Academy Award for Best Supporting Actor for his role in The Untouchables. His film career also includes such notable films as Marnie, Indiana Jones and the Last Crusade, The Hunt for Red October, Dragonheart, and The Rock.

The voice of his character Marko Ramius can be heard inside the Red October as the submarine joins the rebels in the battle in Blue Harvest.

Connery appears in "Baby Not On Board", in the spa with Peter Griffin, Cleveland Brown, Glenn Quagmire, and Joe Swanson. He is also mentioned in "The Juice Is Loose". He appears as James Bond in "Family Gay".

Connery is voiced by John Viener.

Retrieved from "https://familyguy.fandom.com/wiki/Sean_Connery?oldid=153513"
Community content is available under CC-BY-SA unless otherwise noted.