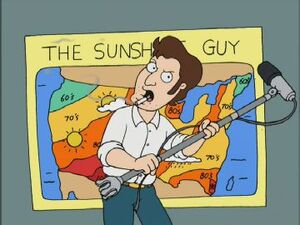 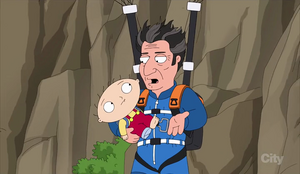 Sean Penn (born August 17, 1960) is an American film actor and director, who is also known for being a political activist. He is a two-time Academy Award winner for his roles in Mystic River and Milk. Penn's personal life began to attract media attention when he married pop star Madonna in 1985. The relationship was marred by violent outbursts against the press, including one incident for which he was arrested for assaulting a photographer on a film set.

Sean Penn is a weatherman in "The King Is Dead" when he has an outburst and attacks the cameraman.

Neil Goldman and Chris trick Sean Penn into dressing up just like his dad, Mort, in "Once Bitten".

Penn parachutes in to save Stewie after he falls from a bridge in "Hot Shots". He also brings a new supply of vaccines when they are destroyed by Peter during his and Lois' involvement with the anti-vaxxer movement.

Retrieved from "https://familyguy.fandom.com/wiki/Sean_Penn?oldid=192283"
Community content is available under CC-BY-SA unless otherwise noted.