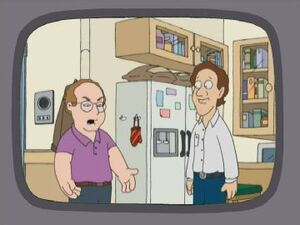 Seinfeld is an American television sitcom that originally aired on NBC from July 5, 1989, to May 14, 1998, lasting nine seasons, and is now in syndication.

Peter Griffin has "The Contest" reenacted by villagers of a South American tribe in Jungle Love.

In "If I'm Dyin', I'm Lyin'", when Peter and Chris go to NBC, the sign outside the building says, "We Used to Have Seinfeld, Remember?"

In "When You Wish Upon a Weinstein", Jerry Seinfeld and Jason Alexander go into a bit about a woman being a tickler, and Jerry not being a "stlicka for a tickla". After this, both continue to say "stickler" and "tickler" continuously. Brian, while watching this part of the show, screams in frustration in regards to his inability to find the remote.

Peter calls one of his wives his "Kramer" when he tries to become Mormon in "The Father, the Son, and the Holy Fonz".

"The Junior Mint", an episode of the series, is discussed by Saddam Hussein and Muammar al-Gaddafi at the Petoria pool party in "E. Peterbus Unum".

In "Airport '07", Peter and Cleveland both attend a comedy show with the guy who played Kramer.

In "Go, Stewie, Go!", when Lois lies to Meg, telling her that Anthony is raping her, the Seinfeld music plays, making fun of how episodes end with something equally awkward but certainly less dark happening.

NBC's low standings among the viewership of the major networks is exploited in "You Can Find It on TV", performed at the 59th Annual Primetime Emmy Awards. In a desperate attempt to move up, Brian mentions rumors about reviving the show. Non-animated pictures of Jerry, and one of the entire principal cast, are seen. Stewie mentions a rumor that Isaiah Washington would replace Richards as Kramer, referencing their recent homophobia and racism controversies, respectively.

In "Lois Comes Out of Her Shell", Stewie compares Sheldon without his shell to a "nude Larry David", comparing him to the co-creator of Seinfeld.

Brian steals a line from Seinfeld for his play in "Brian's Play", although he denies seeing that particular episode.

In "The Boys in the Band", one of Chris' "references" is "yada yada," a catchphrase originating the Seinfeld episode "The Yada Yada".

Peter closes out "No Giggity, No Doubt" in the style of Seinfeld with a stand-up comedy routine.

Stewie makes note of a new version of Seinfeld set in Chicago in "Short Cuts".

In "Undergrounded", Joe Swanson receives checks from and claims to have been on Seinfeld. Joe's voice actor, Patrick Warburton, played the role of "Puddy" on the show.

At The Drunken Clam in "The Movement", Peter and the guys watch an episode of Seinfeld edited down to about three seconds long thanks to syndication. Jason Alexander and the Soup Nazi are briefly seen.

Retrieved from "https://familyguy.fandom.com/wiki/Seinfeld?oldid=224979"
Community content is available under CC-BY-SA unless otherwise noted.