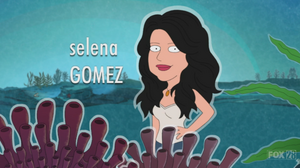 Selena Marie Gomez (born July 22, 1992) is an American actress and singer best known for portraying Alex Russo in the Emmy Award-winning Disney Channel television series Wizards of Waverly Place. She subsequently ventured into feature films and has starred in the television movies Another Cinderella Story, Wizards of Waverly Place: The Movie, and Princess Protection Program. She made her starring theatrical film debut in Ramona and Beezus.

Selena Gomez is one of the guests at the Teen Choice Awards the Griffin family attends on the night of Meg's 18th birthday in "Quagmire and Meg".

Selena is included in Chris' list of celebrities who have led successful lives despite exposing themselves in "An App a Day".

Retrieved from "https://familyguy.fandom.com/wiki/Selena_Gomez?oldid=221119"
Community content is available under CC-BY-SA unless otherwise noted.