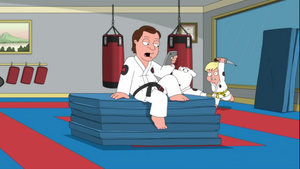 When an old acquaintance convinces Brian that being neutered is the key to success, Brian looks forward to beating the kid that cheats in his karate class. In a cutaway gag, when said kid tries to kick him in the balls and fails, he pulls out a sword during a hand-to-hand match, causing Brian to flee. He tries to bring this to Sensei Dan's attention, but the latter is more interested in his cell phone.

Later, Brian finds out was set up by his 'old friend', and tries to get Sensei Dan to intervene again, with the same results.

Retrieved from "https://familyguy.fandom.com/wiki/Sensei_Dan?oldid=219290"
Community content is available under CC-BY-SA unless otherwise noted.