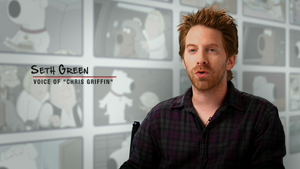 Seth Benjamin Gesshel-Green (born February 8, 1974) is an American actor, comedian, voice actor, and television producer, providing the voices the characters of Chris Griffin and Neil Goldman on Family Guy. He is known for his role as Daniel "Oz" Osbourne in Buffy the Vampire Slayer, as well as Dr. Evil's son Scott in the Austin Powers series of comedy films. Other films include Titan Maximum, Rat Race, The Italian Job, Can't Hardly Wait, as a child in 1990's Stephen King's miniseries It and Without a Paddle.

In the first episode of season 4 of Robot Chicken, he is shown searching for a job, after the cancellation of the show. He runs into Seth MacFarlane, who makes some remarks which lead into cutaway gags, as in Family Guy, and comments on his job as the voice of Chris.

In It's A Trap!, Darth Vader and Emperor Palpatine, played by Stewie Griffin and Carter Pewterschmidt respectively, use their criticisms of Green to incite anger in Luke Skywalker, played by Chris Griffin. After the end of the story, Chris asks his father Peter, who told the story, what he has against Green. Chris fights back by criticizing MacFarlane, who voices Peter, Stewie, and Brian.

Retrieved from "https://familyguy.fandom.com/wiki/Seth_Green?oldid=218476"
Community content is available under CC-BY-SA unless otherwise noted.