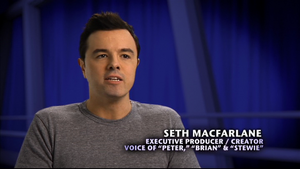 Seth Woodbury MacFarlane (born October 26, 1973) is an American animator, writer, producer, actor, singer, voice actor, and director best known for creating the animated sitcoms Family Guy, American Dad! and The Cleveland Show, for which he also voices many of the shows' various characters.

He studied animation at Rhode Island School of Design where he met co-executive producer and cast member of Family Guy, Mike Henry, which would ultimately lead to the setting of Family Guy, taking place in the fictional Quahog, Rhode Island. He worked for Hanna-Barbera Productions on shows such as Johnny Bravo and Cow and Chicken. He created two short cartoons that paved the way to Family Guy, that bore a striking resemblance to Family Guy itself, titled The Life of Larry, and Larry and Steve. MADtv executives noticed his work and helped MacFarlane get into connection with Fox executives. Fox gave him $50,000 to make Family Guy.

He occasionally speaks at universities and colleges throughout the United States, and is an outspoken supporter of gay rights, atheism, and the legalization of marijuana. These supports have been expressed most emphatically in "You May Now Kiss the...Uh...Guy Who Receives", "Not All Dogs Go To Heaven", and "420", through Brian Griffin, a character he performs without any alterations to his normal voice. 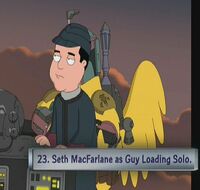 He also voices Stan Smith and Roger the Alien on American Dad!, and Tim on The Cleveland Show. The three characters have crossed over into Family Guy.

He wrote the episodes "Death Has a Shadow", the "Super Griffins" segment of "Family Guy Viewer Mail No. 1", and "North by North Quahog".

MacFarlane has taken part in the writing of every single episode of Family Guy in one way or another, although three episodes finished during the 2007–2008 Writers Guild of America strike were finished without his input. The above list refers to the episodes for which he wrote the original script.

Retrieved from "https://familyguy.fandom.com/wiki/Seth_MacFarlane?oldid=214902"
Community content is available under CC-BY-SA unless otherwise noted.