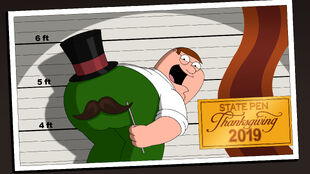 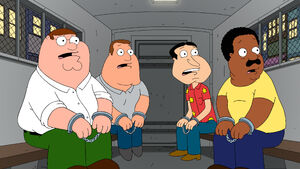 Peter is irritated when Lois informs him that she invited her entire family over for Thanksgiving. Chatting with the guys, he finds out from Joe that a fair number of people actually get arrested on purpose to avoid the holidays so they hatch a plot to do the same. But instead of going to the city jail due to overcrowding, they are diverted to the State penitentiary. Because they can't get out until court convenes the following Monday, they try unsuccessfully to lay low. When that doesn't work, they find their only alternative is to join gangs. Cleveland Joe and Quagmire find success but Peter is nearly left out, until he is offered a chance to join a bunch of skinheads. However, he finds it is on the condition that he shivs Cleveland. 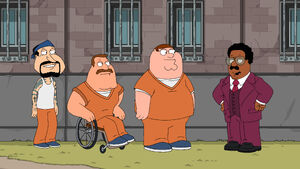