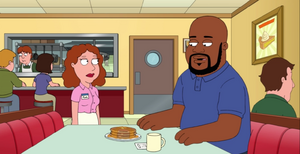 When Peter tries to figure out how to make Carter Pewterschmidt mean again in "Regarding Carter" so he won't give away the family inheritance, he notes that everyone gets angry including Shaq, who is shown discussing a lack of a Superman "S" on his pancakes with a waitress. While is seems calm he notes that he is mad.As the waitress sets out to fix his pancakes, he also requests a big ambulance because he is stuck in the booth.

Shaq is voiced by Aries Spears.

Retrieved from "https://familyguy.fandom.com/wiki/Shaquille_O%27Neal?oldid=208019"
Community content is available under CC-BY-SA unless otherwise noted.