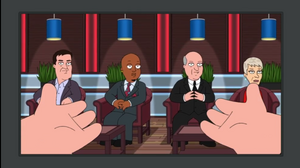 Shark Tank is an American business reality television series that shows entrepreneurs making business presentations to a panel of five investors or "sharks," who decide whether to invest in their company.

When the guys wonder if they've ever let any million-dollar idea slip through their hands while drunk in "Bri-Da", they decide to wear Joe's body cams from work to see what they miss. after a night of drinking they find that they came up with the idea for 'warm cuts'...heated cold cuts. They present their idea on Shark Tank to the judges consisting of Robert Herjavec, Kevin O'Leary, Barbara Corcoran, Daymond John, Lori Greiner and Mark Cuban. Robert is impressed with their idea and offers the bankroll them for only 10%, however, Peter keeps trying to solicit for another investor instead.

Retrieved from "https://familyguy.fandom.com/wiki/Shark_Tank?oldid=215292"
Community content is available under CC-BY-SA unless otherwise noted.