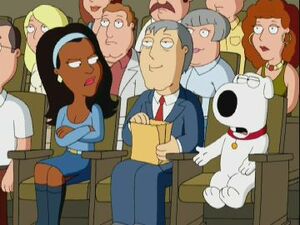 Shauna Parks is a teacher at James Woods Regional High School seen in "Peter's Got Woods". She is Meg Griffin's 11th grade History teacher. Brian goes to a PTA meeting unwillingly in place of Meg's father Peter and the two have their first encounter. They eventually begin dating and while on the date Brian suggests changing the school name to Martin Luther King, Jr. Regional High School instead of having the school remain being named after James Woods, to which she agrees. They hold a board meeting but Peter and James, during their support attempt for the name change, convince the board that Woods's valiant act is enough to keep it named after him. Later, Brian is late for a date with Shauna and she asks Brian why he is still hanging around Peter. She gives him an ultimatum, to choose between her and Peter. By choosing Peter, Brian effectively ends the relationship.

She can also be seen in the mob in "The Juice Is Loose". She is voiced by Gabrielle Union.

Retrieved from "https://familyguy.fandom.com/wiki/Shauna_Parks?oldid=161763"
Community content is available under CC-BY-SA unless otherwise noted.