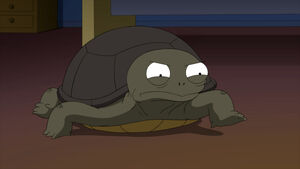 Sheldon is a turtle that Stewie Griffin finds in a pond in a park in "Lois Comes Out of Her Shell". After taking him back home intending to make a pet out of him, Sheldon sets about ruining the family's life. When Stewie has a close call with Sheldon in the vicinity he begins to get suspicious. Sheldon's attempt at revenge is revealed late one night and Stewie is forced to flush him down the toilet. When he reaches the end of the sewer pipe, he returns for more revenge. Stewie finds Rupert's and another stranger’s head in boxes and vows to get even with Sheldon. After Sheldon bursts into Stewie's room for a showdown, Stewie nearly loses his fight until saved by Mario.

Retrieved from "https://familyguy.fandom.com/wiki/Sheldon?oldid=171049"
Community content is available under CC-BY-SA unless otherwise noted.