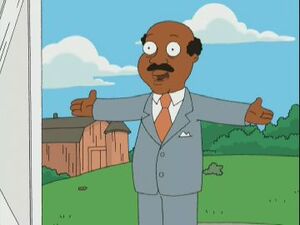 Sherman Alexander Hemsley (February 1, 1938 - July 24, 2012) was an American actor, most famous for his role as George Jefferson on the CBS television series All in the Family and The Jeffersons and as Deacon Ernest Frye on Amen. He also played Earl Sinclair's horrifying boss, a Triceratops named B.P. Richfield on the Jim Henson sitcom, Dinosaurs.

In "PTV", the Bunkers attempt to terrorize the Jeffersons while dressed as Ku Klux Klan members.

In "The Father, the Son, and the Holy Fonz", he encourages members of The Church of The Fonz to join "The Church of George Jefferson". He voiced himself.

While searching for God in "3 Acts of God", Cleveland tries entering a church like Sherman does in the intro to Amen but he finds a baby's funeral going on in the church.

Sherman's autographed picture hangs in a dry cleaners in "Are You There God? It's Me, Peter".

Retrieved from "https://familyguy.fandom.com/wiki/Sherman_Hemsley?oldid=205106"
Community content is available under CC-BY-SA unless otherwise noted.