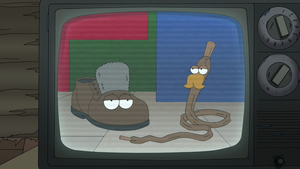 Shoe & Shoelace is a Russian-Soviet cartoon that Stewie watches when he fantasizes about being sent to Siberia for wrecking Brian's car in "Stewie Goes for a Drive".

Retrieved from "https://familyguy.fandom.com/wiki/Shoe_%26_Shoelace?oldid=211927"
Community content is available under CC-BY-SA unless otherwise noted.