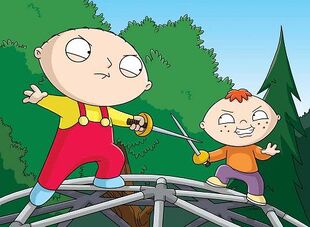 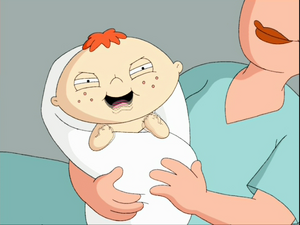 After a pregnancy scare, Peter reluctantly agrees to get a vasectomy, but before the surgery, he goes to donate his sperm in case he and Lois want another baby. However, while donating his sperm at Quahog Cryolab, he accidentally knocks a large rack of samples over and replaces them himself so that he won’t get in trouble. One of the recipients of his sperm is a lesbian couple, who give birth to Stewie’s half-brother Bertram, who appeared in “Emission Impossible”.

Meanwhile, Stewie has declared his rule over the Playground and all the kids have been forced to bow to him. Bertram, leads a group of dissenting kids, and declares war against Stewie for rule of the playground. After a fight between Stewie's fighter jet fleet and Bertram's helicopter forces proves inconclusive, Bertram resorts to biological warfare, infecting Stewie with chickenpox and taking control of the playground. Stewie's "supposed" girlfriend becomes Bertram's servant, and all the kids are subject to him.

Stewie infiltrates Bertram’s camp in the center of the Playground, after defeating many of his playground guards, and engages him in a swordfight. Stewie finally prevails, disarming Bertram. Later in the night, Stewie and Christopher Moltisanti suspiciously dig a hole; which is later revealed to be for planting a young tree. Stewie then reveals that Bertram admitted defeat and ran off. 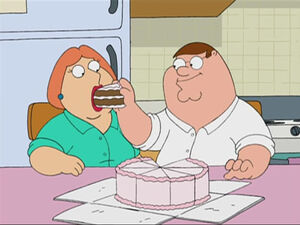 After the vasectomy, Peter’s sex drive becomes nonexistent. Lois does not like this and takes out her frustration by eating and she becomes fat. When Peter ridicules her for the weight gain, Lois points out that he is way fatter than her but Peter blatantly says that men can't be fat. Angry at her husband, Lois' eating out of frustration turns into eating out of spite as she deliberately puts on more weight, eventually becoming about the same size as Peter, if not more. In bed one night as they try to ignore each other they accidentally have sex. Peter’s interest is renewed, claiming it to be the hottest sex they’ve had yet and things heat back up, until Lois' unhealthy eating habits get the best of her. She suffers a heart attack, and during the surgery the doctor removes the fat to get to her heart and return her to normal. Lois says that you shouldn't eat to feel better about yourself, of course saying that to Meg instead of her actually obese son Chris to whom she compliments his hat. Peter is found making out with the massive bag of Lois' removed fat, he tries to come up with an excuse before just admitting "Its exactly what it looks like".

Retrieved from "https://familyguy.fandom.com/wiki/Sibling_Rivalry?oldid=216449"
Community content is available under CC-BY-SA unless otherwise noted.