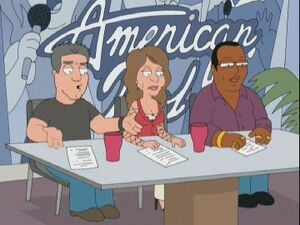 Simon Phillip Cowell (born October 7, 1959) is an English television personality, A&R executive, television producer, and entrepreneur. He is famous in the United Kingdom and in the United States for his role as a talent judge on TV shows such as Pop Idol, American Idol, The X Factor, and both Britain's and America's Got Talent.

In "Run, Chris, Run", Stewie goes camping with One Direction, feeding them horror stories of hotels with no sparkling water in the mini bar and non-skinny jeans, sending them running for the woods. Concerned about their safety, Stewie checks with Simon to confirm they are tagged, and then sends him running as well with a tale of a loose-fitting t-shirt.

Simon provides his own voice in both episodes.

Retrieved from "https://familyguy.fandom.com/wiki/Simon_Cowell?oldid=198974"
Community content is available under CC-BY-SA unless otherwise noted.