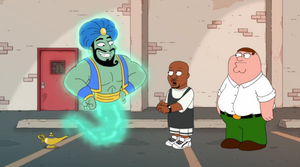 Antoine Roundtree (born March 27, 1975), known by his stage name Skee-Lo, is an American rapper. He is known for his only charting song, "I Wish".

In "Connie's Celica", Peter sets up a cutaway gag in which Skee-Lo messed up his wishes. He's shown making several demands from the lyrics of his song "I Wish" of a genie who grants all of them, but Peter points that the one thing he needed and didn't wish for was money.

Skee-Lo is voiced by Jay Pharoah.

Retrieved from "https://familyguy.fandom.com/wiki/Skee-Lo?oldid=217931"
Community content is available under CC-BY-SA unless otherwise noted.