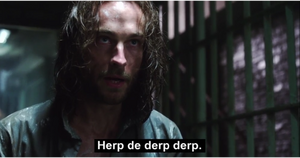 Sleepy Hollow is an American supernatural drama television series that aired on FOX from September 16, 2013 to March 31, 2017. The series is loosely based on the short story The Legend of Sleepy Hollow by Washington Irving which tells of a spectral headless horseman which terrorizes the area around Sleepy Hollow in New York state.

Retrieved from "https://familyguy.fandom.com/wiki/Sleepy_Hollow?oldid=218501"
Community content is available under CC-BY-SA unless otherwise noted.