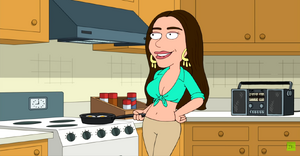 Vergara provides the voices of the flower saleswoman on Peter and Quagmire's date and "Hispanic Woman" in Peter's Spanish soap opera in "The Giggity Wife".

A caricature of Sofía's character Gloria Pritchett appears in "The Simpsons Guy" when the cast of Modern Family meets the cast of All in the Family.

In order to get his old job back on Family Guy after he is fired and replaced by David Spade in "Inside Family Guy", Peter gets Vergara deported so Spade can take her place.

In "Emmy-Winning Episode", Peter seeks her and other celebrities out in order to find out how to win an Emmy.[1]

Retrieved from "https://familyguy.fandom.com/wiki/Sofia_Vergara?oldid=219096"
Community content is available under CC-BY-SA unless otherwise noted.