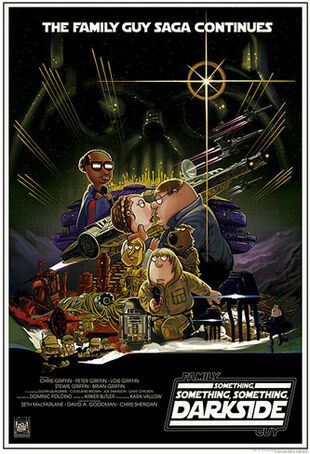 Plot: The story of The Empire Strikes Back is retold. It is the sequel to Blue Harvest. The family experiences another power outage and Peter nearly ventures into telling the story of Black Snake Moan, gets back on track. 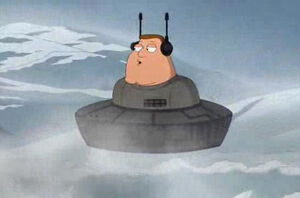 Darth Vader (Stewie), having become obsessed with finding Luke Skywalker (Chris), has multiple probe droids dispatched throughout the galaxy, one of which lands on Hoth. While patrolling near the base, Luke is attacked and knocked unconscious by a Wampa. (Cookie Monster) Back at the base, Han Solo (Peter) announces his intentions to leave and retire his debt to Jabba the Hutt (much to Princess Leia's (Lois) displeasure). But when Luke doesn't return that evening, Han braves the deadly Hoth night to find his lost friend. Escaping from the creature's lair, Luke nearly succumbs to the cold and has a vision of his late mentor, Obi-Wan Kenobi (Herbert), who instructs him to go to the planet Dagobah to train under grand Master Yoda.(Carl) Han finds Luke and provides shelter before they are rescued the following morning. 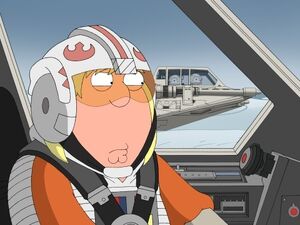 The Imperial probe droid locates the Rebel base on Hoth, and Vader orders an attack while the Rebels prepare to evacuate and disperse. The Imperial forces eventually overpower the Rebels and capture the base. Han and Leia escape on the Millennium Falcon with C-3PO (Quagmire) and Chewbacca. (Brian)

They evade pursuit in an asteroid field, where Han and Leia begin to grow closer to each other. Vader turns to several notorious bounty hunters, including Boba Fett (Ernie the giant chicken), to assist in locating the Falcon. 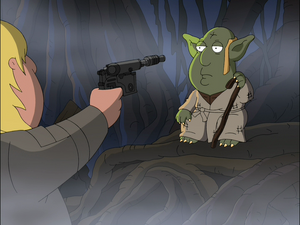 Luke escapes from Hoth with R2-D2 and crash lands on Dagobah, where he meets Yoda. After losing the Imperial forces, and unaware that they have been tracked by Fett, Han's party sets a course for Cloud City, a floating gas mining colony in the skies of the planet Bespin, which is run by Han's old friend, Lando Calrissian. (Mort Goldman) Shortly after they arrive at Cloud City, they are captured by Vader. While undergoing intensive training, Luke has a premonition of his friends in trouble and sets off to rescue them. 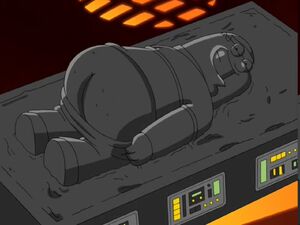 Vader intends to hold Luke in suspended animation via carbon freezing, and selects Han as a test subject for the process. After a somewhat less tender goodbye with Leia than in the original film, Han is frozen for posterity. Lando helps Leia and the others escape. Unfortunately, Fett makes off with his quarry just seconds before they get a chance to confront him, forcing them to make an escape on the Millennium Falcon. 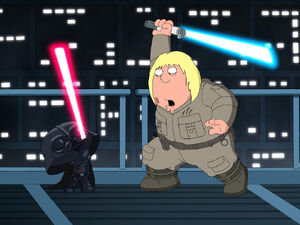 Meanwhile, Luke arrives at Cloud City and falls right into Vader's trap. Luke and Vader engage in a lightsaber duel, which leads them over the city's central air shaft. Gaining an advantage, Vader cuts off Luke's dueling hand along with his lightsaber. With Luke cornered and defenseless, Vader goads Luke to rule the galaxy alongside him, making the revelation that he is in fact Luke's father.

Horrified, Luke casts himself into the air shaft, plummeting until he reaches a tube system that spills him out onto an antenna attached to the underbelly of the city. He makes a desperate call to Leia, who senses Luke's distress aboard the Millennium Falcon and gets him to safety. The final scene of the movie is disturbed by a parody of Back to the Future 2 and the power is restored to the Griffin's house. After a little friendly bantering between Chris and Peter about Robot chicken, Chris tries to relax and not let Peter get to him until Peter brings up the critically panned Without a Paddle that starred Seth Green.