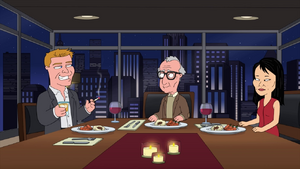 Soon-Yi Previn (born circa October 8, 1970) is the adopted daughter of actress Mia Farrow and musician André Previn, as well as the wife of filmmaker Woody Allen.

In "Petey IV", Peter sets up a cutaway gag that insinuates that Ronan Farrow is actually Frank Sinatra's son instead of Woody Allen's, with Ronan tossing a racist barb at Previn and attempting to buy it back as humor.

Retrieved from "https://familyguy.fandom.com/wiki/Soon-Yi_Previn?oldid=200546"
Community content is available under CC-BY-SA unless otherwise noted.