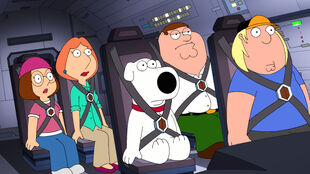 Space Cadet
The Griffins end up in space. 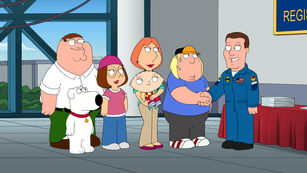 The Griffins find out that Chris is not doing well in school and worry about his future. As they discuss him, he overhears and feels insulted when they don't believe he is smart. To boost Chris' self-esteem, Peter and Lois allow him to go to a camp and he picks a space camp at the Kennedy Space Center. There, Chris has trouble fitting in and calls for his parents to come pick him up. 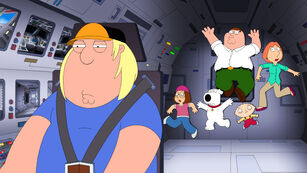 When Griffins arrive, Chris gives them a tour of the space shuttle before they leave and Stewie accidentally launches them into space. As they worry about being stuck in space, Chris thinks he is responsible for getting them stuck. As word spreads about their possible fate, the Griffins explore the shuttle. Mission Control radios they find can get them back but the signal is lost and Peter destroys the radio trying to fix it. They try to land the shuttle themselves and Chris slows down the shuttle using what he learned. Unfortunately the shuttle spins out of control and Chris manages to stabilize it allowing the autopilot to engage. They land to the cheers of the center and Chris is proclaimed a hero as the family has to contend with their new location after Consuela tried to steal their house.

Retrieved from "https://familyguy.fandom.com/wiki/Space_Cadet?oldid=194499"
Community content is available under CC-BY-SA unless otherwise noted.