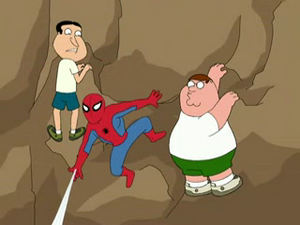 Spider-Man is a fictional Marvel Comics superhero created by writer and editor Stan Lee and artist and co-plotter Steve Ditko. He first appeared in Amazing Fantasy #15 in 1962.

Bruce wore a Spider-Man sweatshirt in the horror shop at which he worked in "Chitty Chitty Death Bang".

In "Let's Go to the Hop", he used his webs to save Peter Griffin from a fatal fall, claiming that everybody who gets in a dangerous situation gets to be saved by Spider-Man once.

In the second segment of Stewie Griffin: The Untold Story, "Bango Was His Name Oh", Peter distracts Lois while she's gardening, by dressing up as Spider-Man, crawling along the clothesline and singing a made up song in the rhythm of Batman's theme song. The scene eventually becomes a romantic cuddle.

In "Mother Tucker", an obese man dresses up as Spider-Man in an episode of Three Wishes, giving a very sick boy a gift card.

In "Believe It or Not, Joe's Walking on Air", he also saves Cleveland Brown when he falls off a cliff. Peter then tells him what Spider-Man told him when he needed saving, that everybody gets one chance.

In "Back to the Woods", when Brian asks Stewie how fast he can forge an ID for Peter, Stewie says he can do it faster than Spider-Man gets laid. Spider-Man is then seen clad only in his mask and boxer shorts, sitting on the edge of his bed, apologizing to a sexually unsatisfied woman under a spiderweb about his premature ejaculation.

In the DVD version of "The Former Life of Brian", Herbert dresses up as the webslinger with his sights set on Stewie.

In "And Then There Were Fewer", Chris gets an Amazing Spider-Man comic in the mail, along with the invitation to James Woods's mansion.

He appeared in "Joe's Revenge", being asked for help by Peter, but refuses and becomes offended because the latter called him "Spidey" and not Spider-Man. 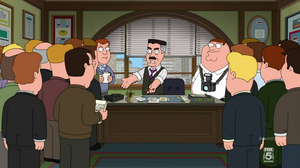 Peter gets Peter Parker's crotchety boss J. Jonah Jameson pictures of Spider-Man in "The Simpsons Guy", which also include pictures of women in thong underwear.

Peter takes a kid's Spider-Man hat and mittens along with his toboggan while trying to get to the Park-Barrington Hotel in "The 2000-Year-Old Virgin".

Brian tries to pass off The Bell Jar by Sylvia Plath as being written by Spider-Man to Chris in "Peter, Chris, & Brian", but returns to find Chris with his head in the oven.

In "Three Directors", Herbert offers Chris a "Spider-Man kiss" while he is hanging episode down, referencing the 2002 film version of Spider-Man, in which the titular superhero kisses his girlfriend Mary Jane while in the same position.

Peter is searching for his Spider-Man socks before falling down the stairs in "Stewie's First Word".

Joe mentions Willem Dafoe's work in Spider-Man with Kirsten Dunst in "Boys & Squirrels", setting off an argument with Quagmire over the pronunciation of their names.

Stewie notes that if he can't find anything with 'baby Yoda' on it at the Quahog Plaza strip mall in "The First No L", he'll settle for something with Spider-Man.

In "Customer of the Week", Peter tries to start a debate about everyone's favorite Spider-Man.

Spider-Man is voiced by Mike Henry.

Retrieved from "https://familyguy.fandom.com/wiki/Spider-Man?oldid=231645"
Community content is available under CC-BY-SA unless otherwise noted.