Spies Reminiscent of Us 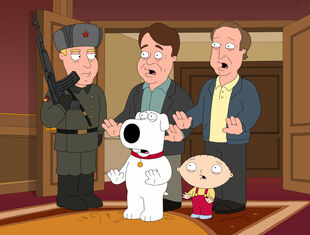 Spies Reminiscent of Us
Chevy Chase and Dan Aykroyd move to Quahog.

Plot: After waking up, Peter and Lois fight to use the bathroom. When Lois wins, Peter, having no place to defecate, runs to Cleveland's empty house. Despite Lois' insistence that using the bathroom of an unoccupied house is disgusting, Peter decides to use the house to go to the toilet from now on, until one day when he visits the house and sees that someone has rented the house. Peter is angered at first until he finds that Chevy Chase and Dan Aykroyd were the ones who rented the house. He invites them to dinner, where he tries to prove his comedic prowess to them, but is infuriated when they tell him they don't find him funny, and he orders them to leave. 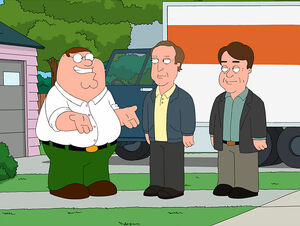 Brian and Stewie find both celebrities sudden appearance to be suspicious and decide to investigate. After activating a Pepsi machine in the house, it becomes an elevator which plummets them down a long shaft into a secret underground base called D.U.M.P.F. (or Deep Underground Military Protection Facility - the F is silent) where Chevy and Dan come clean as spies for the federal government, as a result of being commissioned by President Ronald Reagan, who loved their performance in Spies Like Us. They are tasked with finding a "sleeper agent" who resides in Quahog, and they enlist Brian and Stewie's help.

The newly formed spy group go to see Mayor Adam West to inform him of the program, but incidentally utter the phrase "gosh that Italian family at the next table sure is quiet." which activates the "sleeper agent" status within Mayor West, who fights his way out of the building to head towards Russia. They find their way to Russia, where they are offered help from Prime Minister Vladimir Putin who wishes to avoid an international incident. 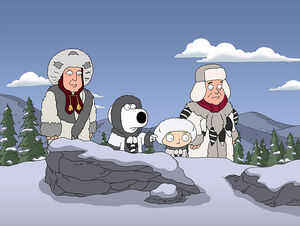 Up in the snowy mountains of Russia, the group find Mayor West but are unable to stop him before he launches a nuclear missile, which is headed towards America. All hope is lost until Dan is reminded of the nuclear missile's guidance system. He reprograms the missile to change trajectory, into outer space where it explodes without harming anyone. However, the shell from the missile falls into Cleveland's new home in Stoolbend, Virginia, causing yet another bathtub mishap for Cleveland.

As Stewie and Brian reflect on the events that have happened, Stewie says the activation phrase again. Meg is 'activated' and instantly goes to the phone, reporting to a Russian on the end - who tells her to shut up.

Meanwhile, after being spurned by Dan and Chevy, Peter proves his comedic values to Joe and Quagmire and they decide to form an improv group. as they get underway practicing for their improv group, it doesn't go too well to well at first. But when Quagmire, sees that Peter is incapable of contributing to the group, he mentally stimulates Peter's improvisation skills out of him.

When the improv group, Room for Improv-ment have their first performance at the Quahog Playhouse, and it all doesn't go to Quagmire's plan when Peter takes over the sketch with his own comedy stylings and Joe defecates. Quagmire then decides that this never should have been tried at all.

Previous Episode /// Spies Reminiscent of Us \\\ Next Episode