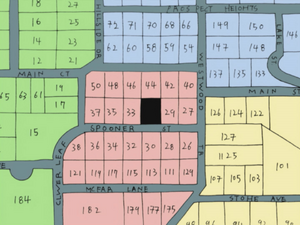 Spooner Street is the street located west of downtown Quahog, Rhode Island where the Griffin Family, the Swanson family and Quagmire currently reside. Cleveland used to live in Spooner Street too, but when he divorced his wife, Loretta, she got the house and he had to temporarily move away. Frequently seen in the distance behind the Griffin house are three buildings: One Financial Center, 50 Kennedy Plaza, and the Bank of America Tower.

In "Love Thy Trophy", Spooner Street won first prize for their "Who's the Boss" themed float in a community parade float competition.

In "E. Peterbus Unum", upon applying for a permit to install a swimming pool, it was discovered that 31 Spooner Street was not a part of the United States. After a failed attempt to maintain an independent nation known as Petoria, it was annexed back into the Union.

One block over is McFar Lane, a reference to Family Guy creator Seth MacFarlane.

Joe Swanson is the only resident that actually pays for his cable.

Spooner Hill Road is a posh street in the town of Kent, CT, where Seth MacFarlane is from.

Retrieved from "https://familyguy.fandom.com/wiki/Spooner_Street?oldid=230857"
Community content is available under CC-BY-SA unless otherwise noted.