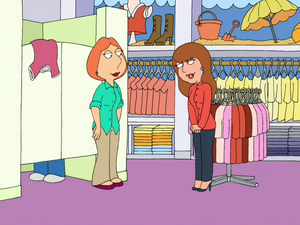 Stacey Scowley is an American actress, appearing in numerous television commercials which include Progressive Auto Insurance, Supercuts, Sony, and Bud Light. Her television credits include roles on Cold Case, Buffy the Vampire Slayer, Monk, Dollhouse and in the film Get On Up.

Stacey has provided numerous voice roles in Family Guy, including the mall clerk in "Don't Make Me Over".

Retrieved from "https://familyguy.fandom.com/wiki/Stacey_Scowley?oldid=167487"
Community content is available under CC-BY-SA unless otherwise noted.