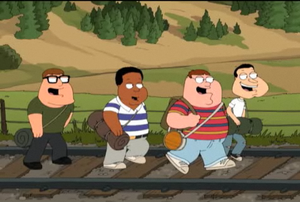 Stand by Me is a 1986 American coming of age adventure-drama film directed by Rob Reiner. Based on the novella The Body by Stephen King, the film takes its title from the song of the same name by Ben E. King, which plays during the closing credits. It stars Wil Wheaton, River Phoenix, Corey Feldman, Jerry O'Connell, Kiefer Sutherland, and Richard Dreyfuss.

The ending of "Brokeback Swanson" parodies Stand By Me in which Peter recounts his life moving on.

"Stand By Meg" uses the title as a reference.

Retrieved from "https://familyguy.fandom.com/wiki/Stand_by_Me?oldid=202704"
Community content is available under CC-BY-SA unless otherwise noted.