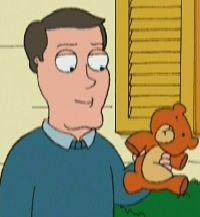 Stanford Cordray appeared in "Road to Rupert" when Brian accidentally sells Rupert to him at a yard sale for $1.00. Through DNA testing of the dollar bill that was used, Stewie is able to identify the buyer and track him down. Records showed that he lived at 89 Spooner Street although he has recently relocated to Aspen, Colorado. He is tracked down and challenged to a ski contest in order to win back Rupert. Mr. Cordray resides in Aspen with his wife and son. It is revealed he is 39 years old. He is married and has a son Timmy.

He was voiced by actor Rob Lowe.

Retrieved from "https://familyguy.fandom.com/wiki/Stanford_Cordray?oldid=171368"
Community content is available under CC-BY-SA unless otherwise noted.