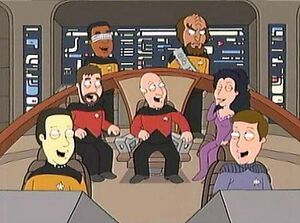 Star Trek is an American science fiction entertainment franchise. The original Star Trek is an American television series, created by Gene Roddenberry, and followed the interstellar adventures of Captain James T. Kirk and the crew of the Federation Starship Enterprise. This series debuted in 1966 and ran for three seasons, after an initial pilot film “The Cage,” which starred Jeffrey Hunter as Captain Christopher Pike was rejected by Paramount. Following the release of other series in the franchise, the Kirk-lead series was retroactively referred to as Star Trek: The Original Series. These adventures were continued by the short-lived Star Trek: The Animated Series and six feature films. Four more television series were eventually produced, based in the same universe but following other characters: Star Trek: The Next Generation, following the crew of a new Starship Enterprise set a century after the original series; Star Trek: Deep Space Nine and Star Trek: Voyager, set contemporaneously with The Next Generation; and Star Trek: Enterprise, set before the original series, in the early days of human interstellar travel. Four additional feature films were produced, following the crew of The Next Generation, and a 2009 reboot of the franchise, directed by J.J. Abrams, featuring a young crew of the original Enterprise set in an alternate time line.

The franchise also includes dozens of computer and video games, hundreds of novels, as well as a themed attraction in Las Vegas that opened in 1998 and closed in September 2008, and at least two traveling museum exhibits of props. Beginning with the original television series and continuing with the subsequent films and series, the franchise has created a cult phenomenon and has spawned many pop culture references, including on Family Guy.