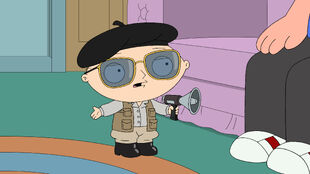 Start Me Up
Brian, Chris and Stewie create a kickstarter campaign. 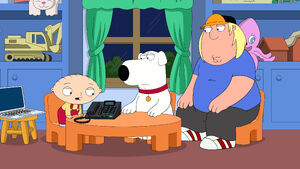 While Brian tries to return a keyboard to the electronics store, Stewie and Chris' horseplay ends up wrecking the place and leaves Brian with the bill. To pay it off, he decides to launch a kickstarter for a film after seeing a news story on Zach Braff also doing it, although they plan on backing out of the film after raising the money. After a misfire which involves a call placed to the entire city of New York and another with a video by Stewie, they find they have raised $1,500,000 and find they really have to make the film. A table read for their unnamed project doesn't go well, but they eventually make a movie about a hockey playing dog. But when it makes a racist comment in the film, the audience revolts. 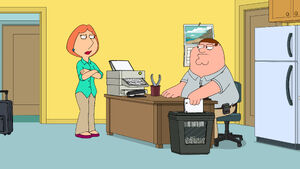 Meanwhile, when the air conditioning goes out in Peter's car, his boss suggests that he works from home due to his sweating. Stunts include a bodega in the living room and complaining to HR after Lois kisses him, and to Super HR when the original HR agent holds his hand. Peter soon begins to wear on Lois' nerves so she decides to turn the entire house into office space. Peter takes the hint and asks his boss if he can return to the office.

Previous Episode /// Start Me Up \\\ Next Episode