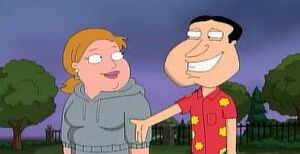 Stephanie was a woman who appeared in "And Then There Were Fewer" as Glenn Quagmire's annoying and very talkative girlfriend. Noticeably overweight, the two had a one-night fling some time before the episode took place. She died from a gun shot that Diane Simmons intended for James Woods. Stephanie's murder was the only one done by accident as opposed to the other four that were intentional, as Diane never intended to kill her in the first place. Her body mysteriously disappeared from the dining room after the guests tried to flee Woods' mansion, and no one seemed to know where it was when they returned and even Diane later admits to Lois that she doesn't know where it went when the guests started to panic. However, it turns out that Stephanie's corpse was actually taken by Quagmire during the panicking of the guests, and he shoves it into his car before driving away.

She was voiced by Alex Borstein, who during the commentary for "And Then There Were Fewer" stated that Seth MacFarlane had asked her to use her "fat" voice.

Retrieved from "https://familyguy.fandom.com/wiki/Stephanie?oldid=221495"
Community content is available under CC-BY-SA unless otherwise noted.