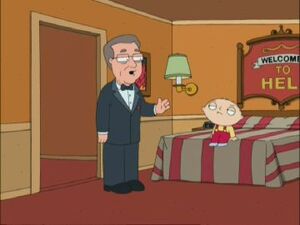 Stephen Valentine Patrick William "Steve" Allen (December 26, 1921 – October 30, 2000) was an American television personality, musician, actor, comedian, and writer. Though he got his start in radio, Allen is best known for his television career. He first gained national attention as a guest host on Arthur Godfrey's Talent Scouts. He graduated to become the first host of The Tonight Show, where he was instrumental in innovating the concept of the television talk show. Thereafter, he hosted numerous game and variety shows, including The Steve Allen Show, I've Got a Secret, The New Steve Allen Show, and was a regular panel member on CBS's What's My Line?.

In Stewie Griffin: The Untold Story segment "Stewie B. Goode", Stewie Griffin wakes up in Hell, sitting on a bed in a hotel room. Stewie doesn't think much of it before Steve Allen walks in, takes his shirt off and says “All right, let’s do this.” Stewie screams and comes back to life, waking up back at the pool. Allen is puzzled by his disappearance as he only wanted his collar fixed.

Retrieved from "https://familyguy.fandom.com/wiki/Steve_Allen?oldid=150432"
Community content is available under CC-BY-SA unless otherwise noted.