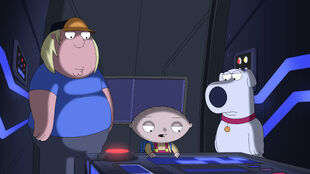 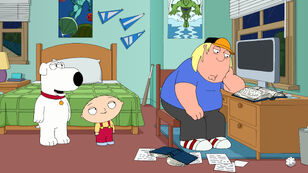 When Chris returns from school with a note requesting a conference, his parents discover that Chris is struggling in school and his only hope is to pass his history class to pass 9th grade. Peter tries to coach him through but his antics fail. Left to his own devices, Stewie and Brian quiz him and realize he needs extreme help. Stewie decides to take him for a tour of history in the time machine. Sneaking into his room, they tell him he's dreaming and take off for the past.

Stopping off in 1803, they observe Jefferson trying to convince congress to approve the Louisiana Purchase. In Paris 1920, they meet Earnest Hemingway. Bouncing further through other history events, Brian takes a detour to kill Pavlov and Stewie gives money to a young Adolf Hitler. When they find Chris hasn't absorbed anything, they decide he's a moron, angering him as he takes off and boards the RMS Titanic with Stewie's return pad, leaving them to board the ship to stop him. 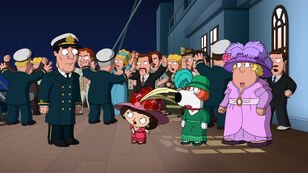 Barely catching a mooring rope, they climb aboard and split up to search. They find him in a dining room and Chris wants to know why they can't avoid the disaster as Stewie tries to cling to the illusion that it is a dream. But as they step aboard the return pad, the ship strikes the iceberg and the pad is destroyed by the rushing water before Stewie can set the return coordinates for home. Needing to get it to dry land to repair it, they dress as women and head for the lifeboats but find they are too late until Chris forces room for them in the last boat. Stewie apologizes for calling him a moron and admits his strength is physical. Repairing the pad and returning, Chris returns to sleep briefly and wakes up still not knowing history. but Stewie and Brian find out that Chris killed the ancestor of his history teacher, leaving him with a new one without emphasis on grades.