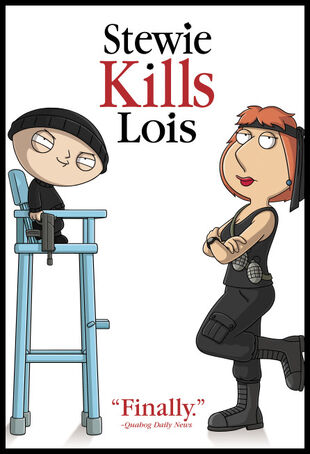 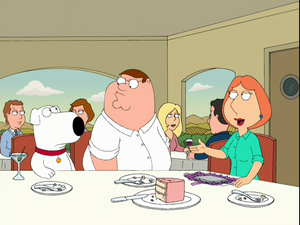 The episode opens with the family at a dinner celebrating Lois' birthday; the family gives her mediocre gifts. To their displeasure, Brian gives Lois a pair of tickets for a cruise, which she assumes are for her and Peter. Lois and Peter take the trip alone, not even taking Stewie. This greatly upsets Stewie and, as soon as he returns home, he begins to plot a diabolical plan to humiliate Lois out of revenge for leaving him behind, which he intends to carry out as soon as Lois returns. Brian scoffs, noting that Stewie has never followed through with any of his diabolical plans before, and is completely skeptical that he will do so this time. Stewie realizes that Brian is right, so he decides to take immediate action to rectify the problem.

Meanwhile, on the ship, Peter proves to be a continual embarrassment to Lois: he defecates on the poop deck, thinks Philip Seymour Hoffman and not Kate Winslet was the lead in Titanic opposite Leonardo DiCaprio, and tells a story at the captain's table about how they almost aborted the fetus that would become Meg. Humiliated, Lois has a falling out with Peter. At this time, Stewie, who has made his way onto the ship via speedboat, finds and confronts Lois. Lois, who had gone outside to mull over her frustration with Peter, is completely astonished to see him, wondering how he came on board without her knowing. To add to her shock, Stewie pulls out an machine gun and, after a brief moment of tension, opens fire. Lois' chest is graphically riddled with bullets and she falls overboard, her body plunging and sinking deep into the ocean's abyss leaving Stewie ecstatic that he has finally killed his mother. 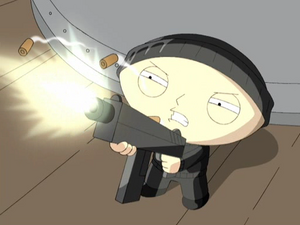 Six days later, Lois is considered missing and Stewie is elated to discover that no one suspects foul play as the other Griffins begin to worry. Since she has been missing for so long, Joe tells a distressed Peter that the search for her has been called off and he must now accept the fact that Lois is gone.

A year passes and, during this time, the Griffins have managed to move on with their lives: Peter begins dating other people; Chris has been led to believe that Lois is merely away at a health spa; and Meg, as Stewie states, has really begun to flourish after Lois' murder. Brian restates that her death was an accident, but Stewie counters by saying that was what everyone was led to believe. Greatly disturbed by this revelation, Brian realizes that Stewie actually carried out his plan, and vows to bring him to justice.

At The Drunken Clam, Peter mentions to his friends that his wife's life insurance has finally paid out. He casts much suspicion on himself by noting that he took out the policy while they were on the ship, just after having secretly wished she were dead after their fight. Incidentally, Stewie realizes that keeping evidence of his crime as mementos is too risky with Brian snooping around, and throws into the trash his drawings depicting Lois getting killed in various ways and his gun. Joe and the others search the trash and find these items just after Stewie disposes of them. This proves serendipitous however, as Joe and the others think that Peter made them, and are forced to accept Peter as the killer. Noticing the coincidence, Stewie is ecstatic now that it appears that he's indeed pulled off the "perfect murder."

Peter is brought to trial, where Brian does everything in his power to keep Meg and Chris from believing he killed their mother. The prosecutor manages to get Peter to reveal things that would make it seem obvious as to why he would kill her, albeit perhaps unintentionally. Peter is found guilty of murder in the first degree and is almost sentenced to life in prison with no possibility of parole. Before the judge can officially make the sentence, a mysterious figure enters the courtroom and it's none other than Lois herself, very much alive. The Griffins are greatly relieved and overjoyed to find she is safe and that Peter didn't kill her after all. After happily reuniting with her family, Lois goes on to implicate Stewie as her would-be killer, setting the stage for "Lois Kills Stewie".

Retrieved from "https://familyguy.fandom.com/wiki/Stewie_Kills_Lois?oldid=217420"
Community content is available under CC-BY-SA unless otherwise noted.