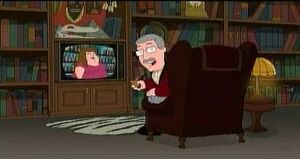 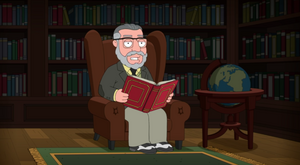 The Storyteller is a random character that often appears in a huge chair and tells the ending of origin stories.

He appears in "The Man with Two Brians" and "Welcome Back, Carter". In the former, he watches a Family Guy cutaway, explaining the origins of the phrase "What a croc!". In the latter, he watches Paula and her friends press their faces up together so intensely they merge into one fat girl, and explains that that is how fat girls are made.

In "A House Full of Peters", he wraps up a homosexual Orville Redenbacher cutaway gag, claiming it to be the origin of "gay as a bag of popcorn."

The Storyteller points out in the Helen of Troy segment of "Heart Burn" that Medusa making Paris rock-hard would be mythologically correct.

Retrieved from "https://familyguy.fandom.com/wiki/Storyteller?oldid=216838"
Community content is available under CC-BY-SA unless otherwise noted.