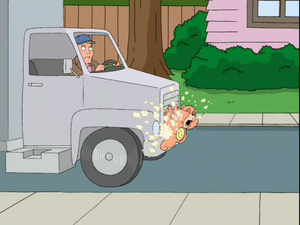 Suicide is the act of killing oneself. It is often done when someone is in a deep depression.

In "Stewie B. Goode", the first segment of Stewie Griffin: The Untold Story, Casper the Friendly Ghost, said that he was planning to kill himself anyway after a ball throw by Stewie Griffin goes fatally awry. In the final segment, "Stu & Stewie's Excellent Adventure", Brian died by eating chocolate out of the trash, and he is sitting with others, who all shot themselves.

In "Believe It or Not, Joe's Walking on Air", Peter imagined shooting himself with Joe's gun.

In "8 Simple Rules for Buying My Teenage Daughter", Adolf Hitler and his wife both attempted to commit suicide together, each trying to not take their own suicide pill.

In "Don't Make Me Over" two people may have committed suicide after seeing Meg.

In "Chitty Chitty Death Bang" all of the Heaven's Helpers cult that Meg joins kill themselves, as Jennifer a member was trying to get Meg to do as well, and almost did.

In "Brian Sings and Swings", one of Meg's teddy bears, named Sunshine Bear kills itself by jumping in front of a car to avoid spending time with Meg.

In "You May Now Kiss the...Uh...Guy Who Receives", committing suicide is on Mayor Adam West's list of diversions.

In "The Man with Two Brians", Stewie wrote a fake suicide note after killing New Brian.

In "Barely Legal", Meg threatened to kill herself when nobody at her school wanted to go to a school dance with her. She threatened it again after Brian volunteered, asking what would happen if she'd still go through with it if he didn't.

In "Peter-assment", Angela attempted to kill herself after Peter refused to have sex with her.

In "Brian & Stewie", Brian reveals he keeps a gun in his safety deposit box in case he ever wants to commit suicide.

In "Brian Wallows and Peter's Swallows", Pearl Burton tries to hang herself after realizing the validity in Brian's rant. Brian saves her just in time.

In "I Take Thee Quagmire", Glenn Quagmire meets, falls in love with and marries a woman named Joan, who is revealed to be a suicidal psychopath when Glenn inquires about divorcing her. At his "funeral", Death comes to claim his body, but Joan grabs Death's wrist, instantly killing her. In the same episode, a man also commits suicide inadvertently by giving Death a high five.

In "Baby Not On Board", a dying child being entertained by Patch Adams in a hospital, is in so much more pain because of Adams's routine that he pulls the life support plug, instantly killing himself.

In "German Guy", Peter shoots himself from the boredom of stamp collecting.

In "I Dream of Jesus", Stewie pulls out a revolver and places the barrel in his mouth.

Stewie watches a "Really Depressing 1970's Sci-Fi Movie Starring a Guy in a Turtleneck" in "Stewie Goes for a Drive". After he and his companion cross a desert to escape "The Corporation", he finds an entire building manned by his clones. Convinced The Corporation has won, his companion convinces him there is only one solution and hands him a gun which he uses to commit suicide.

Also in "Stewie Goes for a Drive", Peter breaks his own neck rather than sit with Lois' book club.

When Peter rigs up Joe, making him think he's gone to Heaven in "The Blind Side", he tries to convince Bonnie to shoot herself in order to join him.

In "Tom Tucker: The Man and His Dream", Bonnie reports Kevin is suicidal having attempted to drink two bottles of dishwashing detergent. Tom Tucker also pulls out a revolver and places the barrel in his mouth to get pumped up for when he gets on air.

Stewie tries to kill himself and Rupert to avoid the robot on the cover of the Queen record album until stopped by Brian in "Killer Queen".

Peter tries to commit suicide repeatedly in the "Family Guy Viewer Mail No. 2" story "Fatman and Robin" when he finds that everyone he has touched has turned into Robin Williams, but fails when the objects themselves turn into Robin. In the later segment "Point of Stew", Meg tries to give Stewie her ring which Stewie notes as a red flag as the giving away of possessions is a sign of suicide.

Meg attempts to kill herself with sleeping pills in "Lois Comes Out of Her Shell" but finds that Sheldon replaced the pills with Alka-Seltzer.

In "Friends Without Benefits", an Asian student commits suicide after losing his focus and allowing another student to cut him in line.

Worried that an enforcer for a Las Vegas loan shark will come after them or the family in "Roads to Vegas", Stewie and Brian decide to kill themselves by leaping from a balcony at the Vegas Star Hotel. However, Stewie has second thoughts and fails to leap, leaving Brian to plunge to his death.

After noting that normal life after being a success could be even better in "In Harmony's Way", Peter goes on his tour bus and shoots himself.

At the end of "Grimm Job", Meg's body is shown being hanged, though only half shown on screen.

Depressed over losing Joe and Quagmire as his friends, Peter gets advice on slitting his wrists in "Brian's a Bad Father". Peter also wonders that if he shoots himself if he'll get a full-page picture in the school yearbook.

Already depressed from facing his own mortality in "Mom's the Word", Stewie is driven to attempt suicide by Brian who tells him that he believes there is nothing after death. Stewie tries to hang himself which only results in an erection. He tries "suicide by cop" but finds Joe is just as willing to have his own life taken in the line of duty. He drops a toaster in a bathtub but only ends up with superpowers. Brian catches him about to jump out of his window and convinces him there is still much to live for, but when he is forced to sit though Stewie's debut as a singer-songwriter, he tosses a gun on the stage for Stewie to attempt to kill himself again.

Joe interprets Peter's intentions of confronting God to commit suicide by hanging in "3 Acts of God" until he is stopped.

Lois worries that Chris is considering suicide in "Fresh Heir" but decides she can fake Chris being mentally ill.

Chris' retaliatory insults, coached by Stewie, cause two bullies that were picking on him to shoot themselves in "Secondhand Spoke".

Peter has a cutaway in which he works at a suicide hotline in "Our Idiot Brian".

Brian tries to pass off The Bell Jar by Sylvia Plath as being written by Spider-Man to Chris in "Peter, Chris, & Brian", but returns to find Chris with his head in the oven. Lois had previously dropped a similar suicide hint to Meg in "Stew-Roids" by giving her a Plath novel and sleeping pills.

It is stated by Cleveland that Donna's mother, Dee Dee has committed suicide by gunshot in "Candy Quahog Marshmallow!".

Tom Tucker finds himself being edged out of the spotlight in favor of new, younger reporter Dallas Portland in "The New Adventures of Old Tom". Taking advice from Peter to act younger results in his being fired. He contemplates suicide by leaping off the roof of his apartment building, but Peter arrives just moments ahead of Dallas who intends to cover the story. Peter shields Tom by claiming to be the one intending to jump and his granting of an exclusive interview with Tom gets him his job back, although he still falls off the room onto people below.

Peter avoids dying in a suicide cult lead by Derek because he doesn't like root beer in "Hot Shots".

When Lois makes the family eat healthy in "Saturated Fat Guy", Peter points out that looking better doesn't solve problems, using Droopy Dog as an example. Despite a permanent smile, Droopy reports he still isn't happy. He pulls out a gun to shoot himself, asking the viewers to study his brain so that others won't suffer as he had. in the same episode, Chris stabs himself with scissors after being told he runs like a girl by Peter. At his funeral, he is buried in a dress.

After losing his penis to a shark in "The Unkindest Cut", Quagmire intends to use his ventriloquist dummy Edgar to goad himself into taking his own life. The guys stop him, although they all have their own dark thoughts as they hold Quagmire's gun. In the same episode, Peter shoots himself rather than go to Quagmire's show.

Faced with having to use old tampon strings or used dental floss to rappel himself down from a trash can, a miniaturized Brian leaps with neither in the hopes of killing himself in "Big Trouble in Little Quahog".

Brian and Stewie interrupt Kevin Swanson's attempt to immolate himself while live streamed in "Stand By Meg" in order to take Meg on a date so she can feel better about herself.

Ida tells Peter in "Trans-Fat" that she considered suicide while living as a man.

While being less than enthusiastic to be on a father-daughter camping trip with Meg, Quagmire and Courtney in "No Giggity, No Doubt", Peter's performance of a 'skit' is to hang himself with an invisible noose.

When Brian has to face Quagmire over dating Ida in "Bri-Da", he notes that he's not the first to deliver tough news, leading to a cutaway gag that hints that Waldo may have committed suicide.

Retrieved from "https://familyguy.fandom.com/wiki/Suicide?oldid=218982"
Community content is available under CC-BY-SA unless otherwise noted.