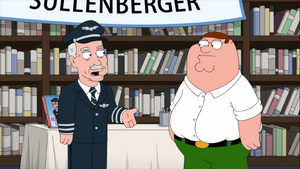 Chesley Burnett "Sully" Sullenberger III (born January 23, 1951) is an American airline transport pilot (ATP), safety expert, and accident investigator from Danville, California. Sullenberger rose to fame when he successfully ditched US Airways Flight 1549 in the Hudson River off Manhattan, New York City, on January 15, 2009, saving the lives of all 155 people on the aircraft.

When Peter and Chris successfully get away with selling fake sports memorabilia, Chris decides to get into other memorabilia as well in "And Then There's Fraud". But when Quagmire buys a Halloween costume hat they pass off as Sully Sullenberger's pilot cap on eBay, they begin to panic. Even worse, Peter finds out that Quagmire intends to get it signed at a meet-and-greet at the airport. Unable to talk him into letting Peter take the hat for him, Peter can only watch helplessly as Quagmire actually succeeds in getting it signed. Peter asks Sully about why he pretended not to know it was fake and he tells him that if it helps Quagmire have a little bit extra confidence when he needs it, he's going to help him any way he can.

Retrieved from "https://familyguy.fandom.com/wiki/Sully_Sullenberger?oldid=230629"
Community content is available under CC-BY-SA unless otherwise noted.