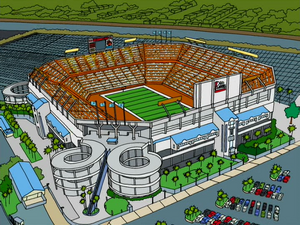 The Super Bowl is the championship game of the National Football League (NFL), the premier association of professional American football. It was first played on January 15, 1967, as part of a merger agreement between the NFL and its then-rival league, the American Football League (AFL). It was agreed that the two leagues' champion teams would play in an AFL–NFL World Championship Game until the merger was consummated in 1970. After the merger, each league became a "conference", and the game was then played between conference champions. The Super Bowl uses Roman numerals to identify each game, rather than the year in which it is held. For example, Super Bowl I was played in 1967 to determine the championship of the regular season played in 1966.

Following Apple Computer's 1984 commercial introducing the Macintosh computer, directed by Ridley Scott, the broadcast of the Super Bowl became the premier showcase for high concept and expensive commercials. A Stewie Griffin parade float appears in a Coca-Cola commercial that aired during Super Bowl XLII, which was between the New York Giants and New England Patriots.

The network that airs the Super Bowl typically takes advantage of the large audience to air an episode of a hit series, or to premiere the pilot of a promising new series in the lead-out slot, which immediately follows the Super Bowl and post-game coverage. When FOX aired Super Bowls XXXIII in 1999 and XXXIX in 2005, they aired the pilots of Family Guy and American Dad!, respectively, pairing them with episodes of The Simpsons. Thus, the early success of Seth MacFarlane can largely be attributed to his shows' post-Super Bowl premiere. Since then, when the game airs on FOX, episodes of Family Guy and American Dad! are preempted, and do not air on those Sundays. Because the Super Bowl is one of the most watched programs every year, only reruns of Family Guy air on Super Bowl Sunday when the game airs on CBS, NBC, or, until 2006, ABC.

However, a Super Bowl commercial features a clip of Family Guy which the NFL subtly branded with Patriots and Cleveland Browns (the latter on the character of the same name) jerseys, with them watching the game between the Green Bay Packers and Pittsburgh Steelers, and game callers Joe Buck and Troy Aikman are seen. Other shows involved include Happy Days, The Simpsons, Seinfeld and The Brady Bunch.

Peter Griffin's actions in the pilot, "Death Has a Shadow", leads him to Pro Player Stadium in Miami, Florida, site of Super Bowl XXXIII, between the Denver Broncos and Atlanta Falcons. Accompanied by his dog Brian, he uses a blimp to hover over the stadium to return the money he acquired through welfare fraud to the taxpayers. Commentators John Madden and Pat Summerall, who called the game for FOX, appeared in the episode doing their jobs. Summerall even retrieved some of the money on the field.

God puts the New England Patriots on a losing streak in "3 Acts of God" as punishment for Bill Belichick refusing to smile after winning three Super Bowls.

Retrieved from "https://familyguy.fandom.com/wiki/Super_Bowl?oldid=224137"
Community content is available under CC-BY-SA unless otherwise noted.