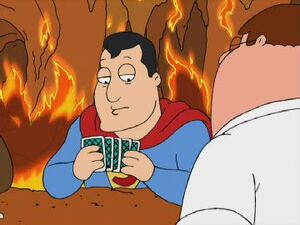 Superman is a fictional character, a comic book superhero appearing in publications by DC Comics, widely considered to be an American cultural icon. He was a founding member of the Justice League. He is voiced by Patrick Warburton in "Holy Crap". Seth MacFarlane provided the voice from Stewie Griffin: The Untold Story until "Blind Ambition". John Viener has provided the voice starting in "Padre de Familia". In addition, Warburton voiced an animated Superman in a series of American Express commercials with Jerry Seinfeld.

He makes an appearance in Hell in "Holy Crap", where Peter believes he is going. He explains that he's in Hell because he killed a hooker after she made a crack about him being faster than a speeding bullet. Here, he was voiced by Patrick Warburton.

In Stewie Griffin: The Untold Story, Superman flies by Wonder Woman's invisible plane and starts hitting on her, but in an awkward moment she's in the jet's bathroom.

In "Blind Ambition", Peter recalls a time when he lived at the Fortress of Solitude when Superman and the Justice League are planning their next move.

In a battle at the Fortress in "The Cleveland-Loretta Quagmire", Superman pulls the "S" off of his chest and throws it at a villain in a highly ineffective attack.

In "Lois Kills Stewie", it is revealed that Consuela cleans the Fortress of Solitude as Superman's maid.

He stars in Superman V: The Broken Condom in "Padre de Familia", where he breaks up with girlfriend Lois Lane after discovering via X-ray vision that she's pregnant.

His voice is heard in Superman IV: The Quest For Peace in a "420" cutaway when Peter goes to see the film after he mentions he likes it when people say the movie's title within the film.

Dean Cain, who played the role in Lois & Clark: The New Adventures of Superman, is wearing a Superman shirt while seeking attention in "Peter's Daughter".

Superman appears when Peter and the guys watch The Superfriends Accountant in "Grumpy Old Man". Here, he is voiced by D. C. Douglas.

In "Ratings Guy", when he finds he doesn't have enough pull to affect national shows, Peter bemoans the fact that he'll never see an episode of Superman where Clark Kent and Lois Lane get together.

Carter Pewterschmidt had planned to bomb a fault line to cause an earthquake and destroy half of Quahog as part of a land deal, a plot that Carl recognizes as being from the 1978 film Superman, in "12 and a Half Angry Men".

He appears as Clark Kent in "The Most Interesting Man in the World", in which he gives women breast cancer with his x-ray vision.

When Quagmire mentions that Karen Griffin is crazy strong like Superman in "Peter's Sister", a cutaway shows Superman and a pair of police officers examining a body of a woman with the top of her head blown off. One of the officers mentions the similarity to another case of three men who died the same way in a public bathroom, although Superman can only declare the cases "unsolvable."

When General Zod turns up at Quagmire's new apartment when he moves out of the neighborhood in "Hot Pocket-Dial", Cleveland notes that 'The guy from Superman is also there'.

Peter successfully imitates Superman by taking off his glasses to hide from Carter Pewterschmidt in "Carter and Tricia".

Shaquille O'Neal gets angry for the lack of a Superman "S" on his pancakes as requested in "Regarding Carter".

Superman at the Superman Wiki

Retrieved from "https://familyguy.fandom.com/wiki/Superman?oldid=208037"
Community content is available under CC-BY-SA unless otherwise noted.