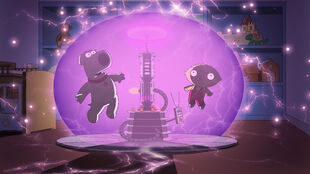 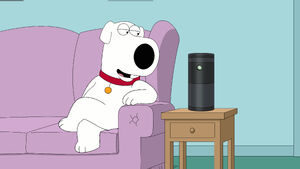 Brian sinks to a new low when he falls for Peter's new virtual assistant Brandee, and when he overspends on its advice, his belongings as well as Brandee are repossessed. Stewie offers to build a device to swap their bodies so he can straighten out Brian's life, but finds the task more difficult than he imagined. When they attempt to return to their own bodies, Peter and Chris burst in fighting and interfere with the process, with Stewie and Peter swapping bodies while Chris and Brian the same as well. Stewie finds his position particularly precarious as Lois is taking "Peter" away for a sexual retreat. 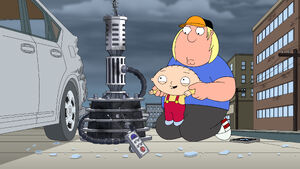 Brian and Chris, with Peter in tow, try to follow along to switch everyone's bodies back, but a run-in with a prostitute and her pimp that Stewie encountered earlier in Brian's body results in a car chase that ends when they smash into a power pole and a fallen transformer amplifies the device so that most of the town swaps bodies. Trying to fend off a horny Lois, Stewie coaches Brian through rewiring the device and placing it on a cell phone tower where he can get it struck by lightning, reversing the effect for the most part, although Brian manages to land in Peter's body to have sex with an unsatisfied Lois.

Retrieved from "https://familyguy.fandom.com/wiki/Switch_the_Flip?oldid=204480"
Community content is available under CC-BY-SA unless otherwise noted.