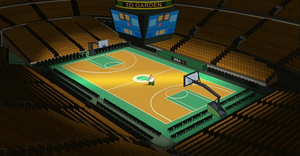 In "Fecal Matters", Peter plays imaginary basketball in an empty TD Garden during a flu epidemic, pretending to play for the Boston Celtics. He fantasizes about the team being down by one with a chance for him to make a game-winning shot before accidentally kicking the ball out of bounds.

Retrieved from "https://familyguy.fandom.com/wiki/TD_Garden?oldid=229664"
Community content is available under CC-BY-SA unless otherwise noted.