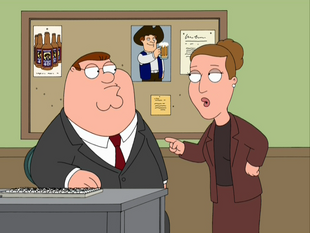 Peter gets a promotion

Tales of a Third Grade Nothing
Peter repeats the third grade. 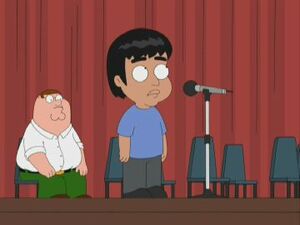 Peter is sent upstairs by his boss to deliver shipping reports to the CEO. On his way to deliver the reports, he decides to go into the executive bathroom. When he discovers how lavish the bathroom is, he becomes motivated to do well at work so that he can become an executive. But while trying to impress his boss Angela, he inadvertently blows up part of a children's hospital. Nevertheless, she is impressed by his improvement at work and recommends an open executive spot for him. However, Human Resources tells him he must first complete the third grade in order to qualify. 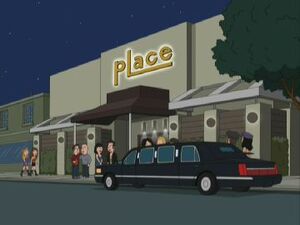 Peter does badly at school but graduates after correctly spelling the word "lesbians" in a spelling bee. When Peter goes back to work, Angela tells him that he will be going to jail for the hospital explosion instead of getting promoted. Fortunately for him, he receives only one week in prison and is told he will be released the following Sunday night at 9:00...Family Guy's usual time slot.

Meanwhile, Frank Sinatra, Jr. comes back to town to perform with Brian at the Quahog Cabana Club. They buy the establishment and let Stewie transform it into a modern dance club called pLace. At first, Frank and Brian feel uncomfortable, but their feelings change once they get into the club life themselves. However, the club loses its popularity once Andy Dick is seen there.

Previous Episode /// Tales of a Third Grade Nothing \\\ Next Episode

Retrieved from "https://familyguy.fandom.com/wiki/Tales_of_a_Third_Grade_Nothing?oldid=216338"
Community content is available under CC-BY-SA unless otherwise noted.