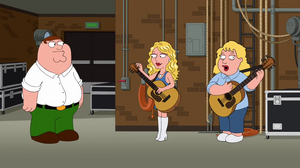 In "Shanksgiving", Stewie insists the DJ play "You Belong With Me" by Taylor Swift at his wedding reception with Clint Beltran".

Retrieved from "https://familyguy.fandom.com/wiki/Taylor_Swift?oldid=223945"
Community content is available under CC-BY-SA unless otherwise noted.