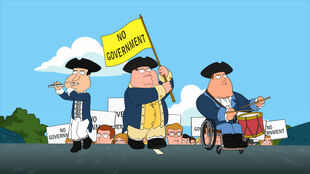 Tea Peter
Peter joins the Tea Party and shuts down the government. 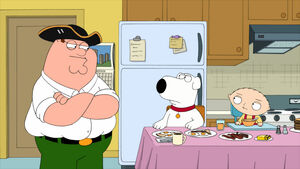 At the grand re-opening of Goldman's Pharmacy, Peter buys a “come in, we're open” sign and decides to go in to business for himself but Joe is forced to shut him down for having an unlicensed business. H tries to fight city hall but loses and finds a sympathetic ear in Quagmire. When they see a news report about the Tea Party they decide to join. 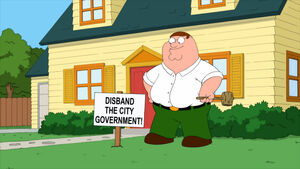 Peter's new belief doesn't go over well with Brian who informs him that the Tea Party is really a tool of big business. Joe tags along to a rally where Carter is posing as an everyday worker. When Peter stops inside to use the restroom, he finds Carter but is fooled into believing the two are separate people and is enlisted to help get rid of the government. Despite the family's resistance, Peter makes calls for Carter on behalf of the Tea Party. In spite of Peter's involvement, they successfully campaign to have Mayor West shut down the government.

As Peter and the family celebrate their new freedom from government, Brian makes them aware of Carter's pollution and as time goes on things get worse. Peter goes to talk to Carter but finds he is unsympathetic. He calls the town together and manages to reform the government by presenting it as an entirely new thing.