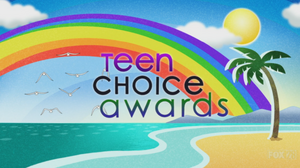 The Teen Choice Awards, are an annual awards show that air on the Fox cable channel, that honor the year's biggest biggest achievements in music, movies, sports, television, fashion and more, voted by teen viewers aged 14 through 17. Winners receive an authentic full size surfboard designed with the graphics of that year's show. The program features a number of celebrities and musical performers that were famous at the time.

The Griffins take Meg out to the Teen Choice Awards on the night of her 18th birthday in "Quagmire and Meg" despite her complaints that she has outgrown them. The guests of honor are Robert Pattinson, Justin Bieber, Zac Efron, and Selena Gomez. As Brian notes that as he gets older the celebrities become less familiar. They also list Lombard Montague, Grace McLady, Andy Colorado, The Mondo Twins, Purple Stuff, Tank Top Gay Face, Chad Zachary, Zach Chadwick, Chad Chadinson, C. Zachary Chad, and Starburst featuring N.Y.T.F.H.$.. Host Wavyhair Doucheston introduces presenter Wilford Brimley who complains about the noise before Douchein quickly segues to musical group Pee Hole Skin. Brimley decides to put a stop to the noise and shoots the band and then starts shooting into the audience.

While narrating a DVD commentary in "You Can't Handle the Booth!", Stewie notes that he won a surfboard at the Teen Choice Awards but left in in the work kitchen hoping someone would take it.

Retrieved from "https://familyguy.fandom.com/wiki/Teen_Choice_Awards?oldid=223744"
Community content is available under CC-BY-SA unless otherwise noted.