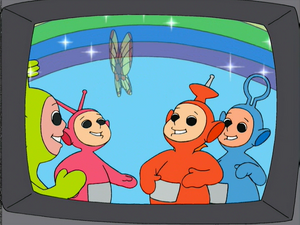 Teletubbies is a BBC children's television series, primarily aimed at pre-school viewers, produced from 1997 to 2001. The show centers around the adventures of Teletubbies Tinky Winky, who is purple, Dipsy, who is green, Laa-Laa, who is yellow, and Po, who is red. In the show, the four colorful Teletubbies play in the cheerful and fun Teletubbyland. They do things that little children like to do, such as rolling on the ground, laughing, running about, and watching real children on the televisions on their bellies. Mysterious pinwheels and telephones rise out of the meadow to show the days' activities. The sun, who has a baby's face, makes baby noises during the show, and it rises and sets to begin and end the show.

Lois makes Stewie watch the show instead of reading The Art of War in "A Hero Sits Next Door". She had angered him at first, but he quickly becomes enamored by the show until Peter changes the channel, freeing him from their hypnotic spell.

Retrieved from "https://familyguy.fandom.com/wiki/Teletubbies?oldid=224288"
Community content is available under CC-BY-SA unless otherwise noted.