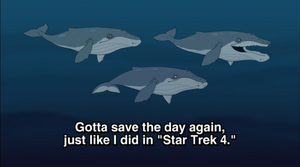 Terry is a humpback whale attracted by the sound of Michael McDonald's voice in "Yacht Rocky".

When the Griffins and their friends are trapped in a capsized cruise ship and water pressure is blocking their escape route, McDonald happens by and summons a pod of humpback whales with the timbre in his voice to nudge the ship and take the water pressure off the door.

Hearing his voice, Terry notes that he has to save the day again like he did in Star Trek 4, causing the other whales to chuckle with sarcasm that Terry never mentions it.

Retrieved from "https://familyguy.fandom.com/wiki/Terry_(Yacht_Rocky)?oldid=215214"
Community content is available under CC-BY-SA unless otherwise noted.