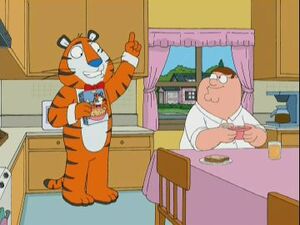 Terry the Tiger is a fictional tiger that is a blatant parody of Kellogg's Frosted Flakes's mascot Tony the Tiger.

He appears in "The Tan Aquatic with Steve Zissou" as the mascot of "Store-Brand, Imitation Frosted Flakes". His catchphrase, in contrast to that of Tony's, is “They’rrrrrrrrrre foooood!”. He also appears on the cereal box.

Retrieved from "https://familyguy.fandom.com/wiki/Terry_the_Tiger?oldid=181672"
Community content is available under CC-BY-SA unless otherwise noted.