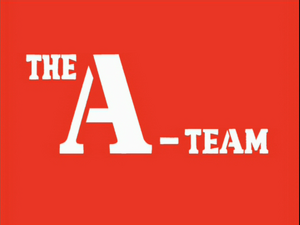 The A-Team is an American action adventure television series about a fictional group of ex-United States Army Special Forces who work as soldiers of fortune while being on the run from the military after being branded as war criminals for a "crime they didn't commit". The A-Team was created by writers and producers Frank Lupo and Stephen J. Cannell at the behest of Brandon Tartikoff, NBC's Entertainment president. The show ran for five seasons on the NBC television network from January 23, 1983 to December 30, 1986.

Peter Griffin and his friends dress up as the A-Team in "Brian Goes Back to College" for a costume fair. Griffin was Colonel John "Hannibal" Smith, Cleveland Brown was Bosco Albert B.A. "Bad Attitude" Baracus, Joe Swanson was Captain H.M. "Howling Mad" Murdock, and Glenn Quagmire was Lieutenant Templeton "Faceman" Peck. They ended up winning, defeating an A-Team with a rabbi as Baracus. After doing so, they stay dressed up as the A-Team and try to do good, but only succeed in causing havoc. After Peter and his friends decide to retire the masquerade because they realized they were doing more harm than good, Lois convinces them to do one last good deed, and drive Brian to his exam when he is late.

In "Fore Father", Lois brings Peter a book called Me and Mr. T by George Peppard, presumably a memoir of their experiences together while filming the show.

In "We Love You, Conrad", it is revealed by Lauren Conrad that her show The Hills uses clips from The A-Team as filler.

Retrieved from "https://familyguy.fandom.com/wiki/The_A-Team?oldid=218567"
Community content is available under CC-BY-SA unless otherwise noted.