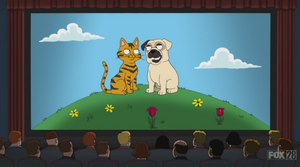 The Adventures of Milo and Otis is a Japanese live action film about an orange tabby cat named Milo and a fawn pug named Otis. Initially filmed as Koneko Monogatari in Kitakyushu, Japan, the film was completely revamped, trimmed and westernized with added narration by Dudley Moore.

In "Be Careful What You Fish For", Brian accepts a date to the movies with Miss Emily although he points out having a bad experience once. During The Adventures of Milo and Otis, Brian shouts at the screen that he refuses to accept the premise of a cat and dog friendship.

Otis is voiced by Chris Cox.

Retrieved from "https://familyguy.fandom.com/wiki/The_Adventures_of_Milo_and_Otis?oldid=134436"
Community content is available under CC-BY-SA unless otherwise noted.